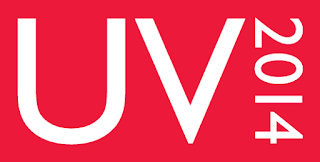 This is a blog for the 2014 Undiscovered Voices anthology blog tour! Undiscovered Voices is a bi-annual competition for unagented, unpublished writers run by the Society of Children's Book Writers and Illustrators. Without UV or SCBWI, I'm not sure I would ever have finished Skulk, let alone found the brilliant Catherine Pellegrino or Strange Chemistry to take it on.

And now, here are six stories from six London locations, each of which played a fairly major role in Skulk and my Undiscovered Voices story...

Tavistock Square Gardens
Picture the scene: it’s mid-November and you’re enjoying a chilly afternoon stroll in one of London’s tiny squares. All of them are pretty much the same – spiky iron railings, enormous trees, wooden benches, pigeons. This particular one is Tavistock Square, just off the Euston Road. You’re enjoying a quiet moment to yourself when all of a sudden thirty nerds in big coats descend, chatting about character and plot, clutching notebooks and laptops.

They settle down on the benches and begin scribbling. Their fingers quickly turn blue from cold, but they don’t stop until their leader announces time to pack up and move on, even though they’re being distracted by the single most persistent and fearless squirrel known to man, which is literally climbing up the benches as if to say ‘So, what’s your novel about?’

This was Nanorilla 2011, the guerrilla writing crawl held by the London chapter of Nanowrimo. I love Nanowrimo, and I’ve taken part every year since 2008, even though I rarely finish a book during the month. The Nano London group is the best in the whole world, no arguments. It’d be wrong of me not to also mention the Big Green Bookshop in Wood Green, where I and a group of equally crazy writers gathered to write through the night. We finally stumbled out, coffee-blind and slightly hysterical, at 6am, before anything was open except the McDonald’s – which is why one scene in Skulk takes place in a 24-hour Mc-D’s.

There are some strange things going on at the Westway Flyover. Like the way that you pass the Hilton and the city just seems to stop. On this side, Notting Hill Gate, Hyde Park, leafy crescents, bespoke cheese shops, houses with areas. On that side, nothing but motorway and suburb and the blocky behemoth of Westfield Shopping Centre. Not a bush or a shepherd in sight.

But the most fascinating thing is that the space underneath the flyover is far from empty – there’s a sports centre there with its own stables, a junk yard that used to have an amazing junk sculpture over the gate, and a caravan park where traveller kids could be seen riding their bikes round and round in tight circles and chasing escaping footballs down the street.
There’s a lot of life going on underneath the Westway Flyover. It seemed an appropriate place for Addie to have made her home.

The Quiet Room
This sounds quite exciting, like an art installation, but actually it’s just a spare office upstairs at Working Partners. The main office is a big open-plan cluster of desks, so the upstairs office room is generally reserved for people who need space and quiet to get stuck into a tricky edit – but it can also be a handy place to sneak a private phone conversation or writing sprint over your lunch hour.

For such an unassuming room, it’s played a surprisingly big part in the story of Skulk. This was where I regularly came to hammer out a few hundred words over a bacon sandwich, but it’s also where I heard I was going to be in the Undiscovered Voices 2012 anthology! And even better, it’s where I snuck off to to take the phone call from Catherine Pellegrino saying that she loved Skulk and wanted to offer me representation. I’ve been so happy in this odd little room that my knees actually went weak, and also so stressed that I considered escape by leaping out of the window onto the Hammersmith and City line. Not bad for a spare office full of boxes of German copies of My Secret Unicorn.

This fountain is the focus of simply one of my favourite and most self-indulgent lines in the whole book. They say kill your darlings, and they’re not wrong – but sometimes they get a stay of execution. If you opened the book of Skulk and on page one it had this line, and the rest was blank, I’d be quite happy.

Of course, since the line actually comes in about halfway through, you’ll have to read the book to find out what it is…

Backstage – and on stage – at the O2 Arena
I’ve sung at the O2 a good four or five times now, almost all as backing to the great – if relentlessly populist – tenor Andrea Bocelli. This was a Crouch End Festival Chorus gig pretty much like any other. Uncomfortable black shoes, Nessun Dorma and Funiculi Funicula (which is an insanely catchy song about an Italian cable car), security wristband, brilliantly goofy percussionists, the tantalising possibility that there may be free tea and biscuits in the dressing rooms.

I realise I’m hugely privileged to think of all this as ‘normal’…
Except that I’d been told that Skulk was going to acquisitions at Strange Chemistry that day.
I checked my email about eight times between the escalator at North Greenwich tube and the backstage area, and indeed, the first email I got came just as I was waiting for the security man to find my name on the performers list and let me through. But it didn’t say ‘yes’, and it didn’t say ‘no’. What it said was, ‘Amanda Rutter, editor at Strange Chemistry, is now following you on Twitter’.

What did it mean? Was it another one of those incredibly nice ‘no’s? Was this like a pity follow, or a ‘we don’t want this but let’s see what she does in the future’ follow?

Or… could it possibly mean… could it…?

About ten minutes later, when we were lining up to go on stage for the soundcheck and rehearsal, I got the email from Catherine. It could. It did mean. Amanda did want to buy Skulk. I had a little jump up and down in the backstage corridor, and broke one of my own rules – no texting in rehearsals – to alert Jessie, my best friend and my Mum.

And when we got to the huge, exhilarating encore of Nessun Dorma later that night, nobody was singing that Gloria with more feeling than me.

The View from The Shard
This place is hugely important to the ending of Skulk, and I’ve never visited it. That’s because when I started writing Skulk, it didn’t exist yet.

I don’t know why I fell so much in love with the Shard before it was even built. One of my favourite procrastination methods from writing Skulk was to go to the architecture nerd forums and skim through the photos of the core as it rose up over the London skyline.

I have no idea if the Shard is a good thing for the economy, but I think it’s beautiful and iconic and a little bit scary. I need to go up there soon – despite the slightly chilling £25 a head to go up to the viewing level.  I need to see whether my wild guesses at the layout are even vaguely accurate!

One thing I’m pretty sure I got right, though: it’s a very long way down.

Submissions for the 2014 anthology open on the first of July! You can find out all about Undiscovered Voices at http://www.undiscoveredvoices.com/
at May 07, 2013