Thing 1: a post-Strange-Chemistry life
Strange Chemistry closed down two weeks ago today. I've been busy - finishing one story, restarting another, rehearsing for the Proms and recording at Abbey Road, trying to persuade my cats that they want to be stroked (they don't), attending Transpose, watching Orange is the New Black and Agents of SHIELD, reading The P45 Diaries (so far I'm unconvinced but it's for Book Club). Plus, working on some very exciting stories for WP. Just... getting on with things.

I have started to make some tentative Plans about what will happen to Rabble, but nothing I can elaborate on yet. Watch this space! As @maggiemassacre pointed out to me on Twitter, Amazon US changed Rabble's listing, not to delete it altogether, but to reschedule it for 2035. I can promise you right here and now, Rabble will appear in some kind of readable form before 2035...

Thing 2: this 8tracks playlist
Songs from animated movies, sung in the language from the country where the story is set. Can You Feel The Love Tonight in an African language and (I can't remember which - 8tracks hides the track list until you've listened to it, which is sort of cool but right now mostly annoying) is a highlight. Under The Sea in Danish - but still in a Caribbean accent - is surreal but also fairly awesome.

Thing 3: Sportsball!
I am unusually invested in how well the sports people sports their sports - mostly down to the office sweepstake we have going in aid of Teenage Cancer Trust. But it might all be over by the end of the day! I am rooting for Columbia to deliver an upset against Brazil this evening. Similarly, my Wimbledon sweepstake tennis player Federer is about to step onto Centre Court right now. Come on, sports people! Sports the ball! Sports it really well!

Thing 4: I lost my keys and found my inspiration
This actually happened a month or two ago, only days after handing in the second draft of Rabble, but I suddenly remembered about it today. I was searching inside the sofa for my lost keys when I unearthed the notebook in which I started collecting my research for my next book, which I was doing when Skulk sold to Strange Chemistry and my writing focus abruptly swung back around to foxes and magic stones.

Here is an exclusive, quasi-representative glimpse of the kind of thing you can expect from this book:

On the end of Strange Chemistry

This was originally posted on my tumblr when the news first went out.


As you will be aware, Angry Robot Books has a history of innovation and we continue to go from strength to strength. We’re constantly trying out new concepts and new ideas, and we continue to publish popular and award-winning books. Our YA imprint Strange Chemistry and our crime/mystery imprint Exhibit A have – due mainly to market saturation – unfortunately been unable to carve out their own niches with as much success.
We have therefore made the difficult decision to discontinue Strange Chemistry and Exhibit A, effective immediately, and no further titles will be published from these two imprints.

In other words, Strange Chemistry and Exhibit A will not be publishing any of the books they were set to publish, including Rabble, which was slated to come out in September. Angry Robot is still going, and will be supporting the books that’ve already been published so you’ll still be able to get copies of the existing Strange Chemistry titles, including Skulk.

Another publisher may come along and take on the imprint and be interested in publishing Rabble, or we may sell it to a publisher on its own. The rights have reverted to me so my options are many and varied. If the worst happens and no established publisher wants Rabble, I would probably self-publish it for those of you who’ve said you’re looking forward to finding out what happens next. But publishing generally moves like a treacle glacier - except, apparently, when chunks suddenly break off - so whatever happens, it probably won’t happen very quickly.

It’s… odd. It’s very odd. I had no idea this was coming until late last night. My deepest commiserations and sympathies go to the entire Strange Chemistry and Exhibit A teams, Amanda in particular, and all my fellow authors - especially those who are mid-series or without day jobs. It’s a really sad loss to YA in general, and a really sad statement about the market at the moment that it can’t support an imprint as generally innovative, exciting and well-loved as Strange Chemistry.

Obviously, finding out Rabble isn’t going to be published (in the time and way I thought it would be) is a kick in the teeth. It’s been a shitty week all round, actually, and that’s even taking into account the fact that CEFC had a really great concert and someone on Game of Thrones actually made a sensible decision for once.

And yet… I just handed in the second draft of Rabble last month. It was difficult going, but we made it. And so in fact, my writing brain has pretty much moved on to other things. SC had the first right of refusal on my next book, but a) they might have refused anyway and b) I haven’t written it yet. So in a way, my very immediate future hasn’t changed very much: my aim now is the same as it was yesterday, to write good new things and sell them to somebody. It’s an extremely odd and contradictory feeling.

Anyway, it’s really, genuinely been a privilege to share an imprint with all of the incredible SC writers. We are set adrift, but in the best possible company. I hope and believe that all of us will find new homes for our stories sooner or later.
at June 23, 2014 No comments:

Thing 1: Moving, just keep moving
I moved house two days before Christmas. This was definitely better than moving two days after Christmas would have been, but quite stressful and weird all the same.

My house is awesome. It has stairs. And a fireplace. That you can put fire in. And working wifi, and doors, and a dishwasher which has changed my life pretty much beyond recognition, and a garden although not really plants yet, and a shed, and a table you can actually sit at, and nowhere near enough bookshelves. It's pretty wonderful.

Thing 2: The Rabble first draft is in!
It was hard work and there is a lot more hard work to come, but it is done and I have done it. I have been celebrating by finally tidying my living room and spending a lot more time on Twitter.

Thing 4: KITTENS!
We adopted a very beautiful, very timid pair of kittens, Misty and Midnight, from the local RSPCA. They are getting bigger and less timid every day and it's a joy to watch. 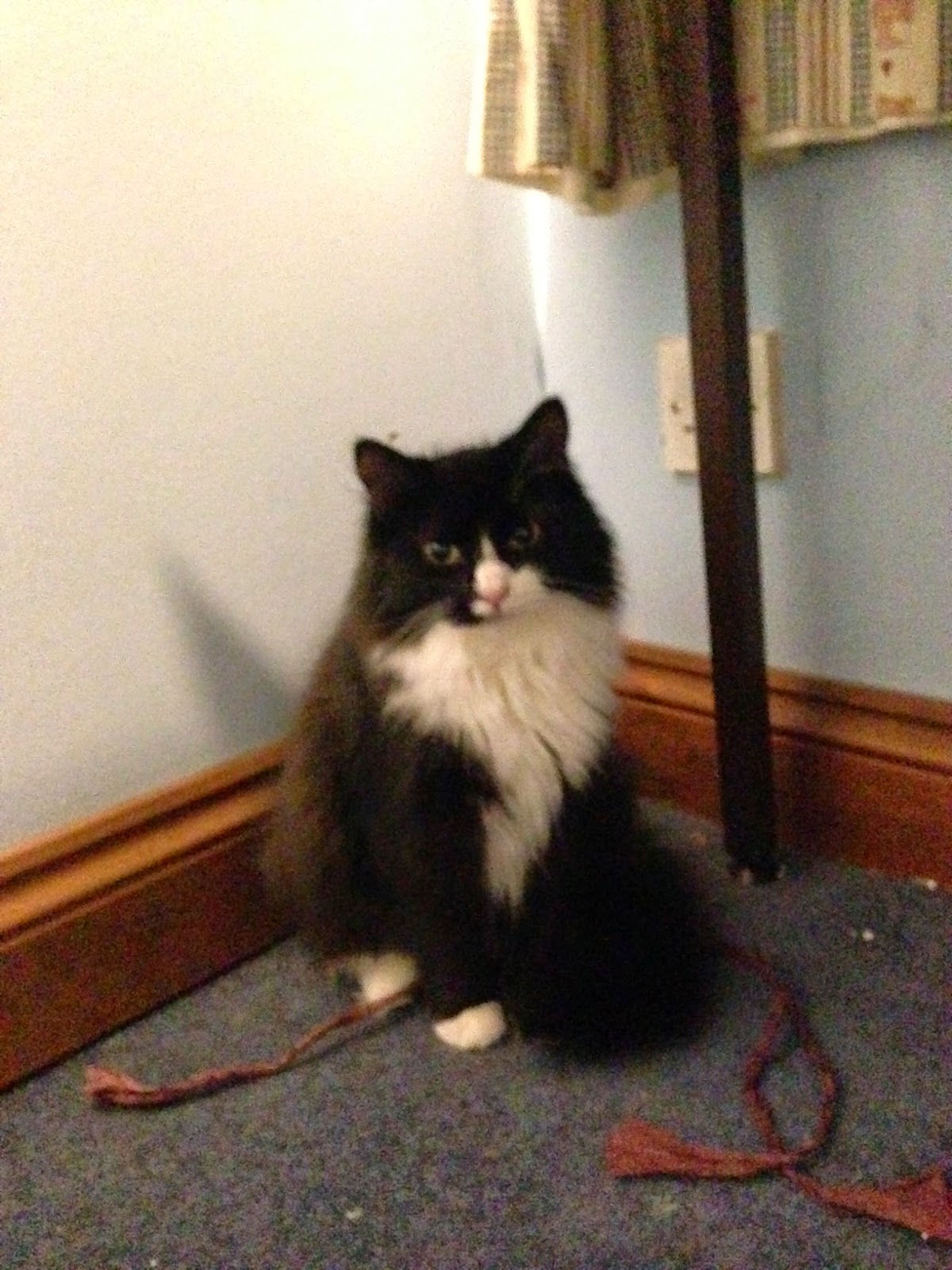 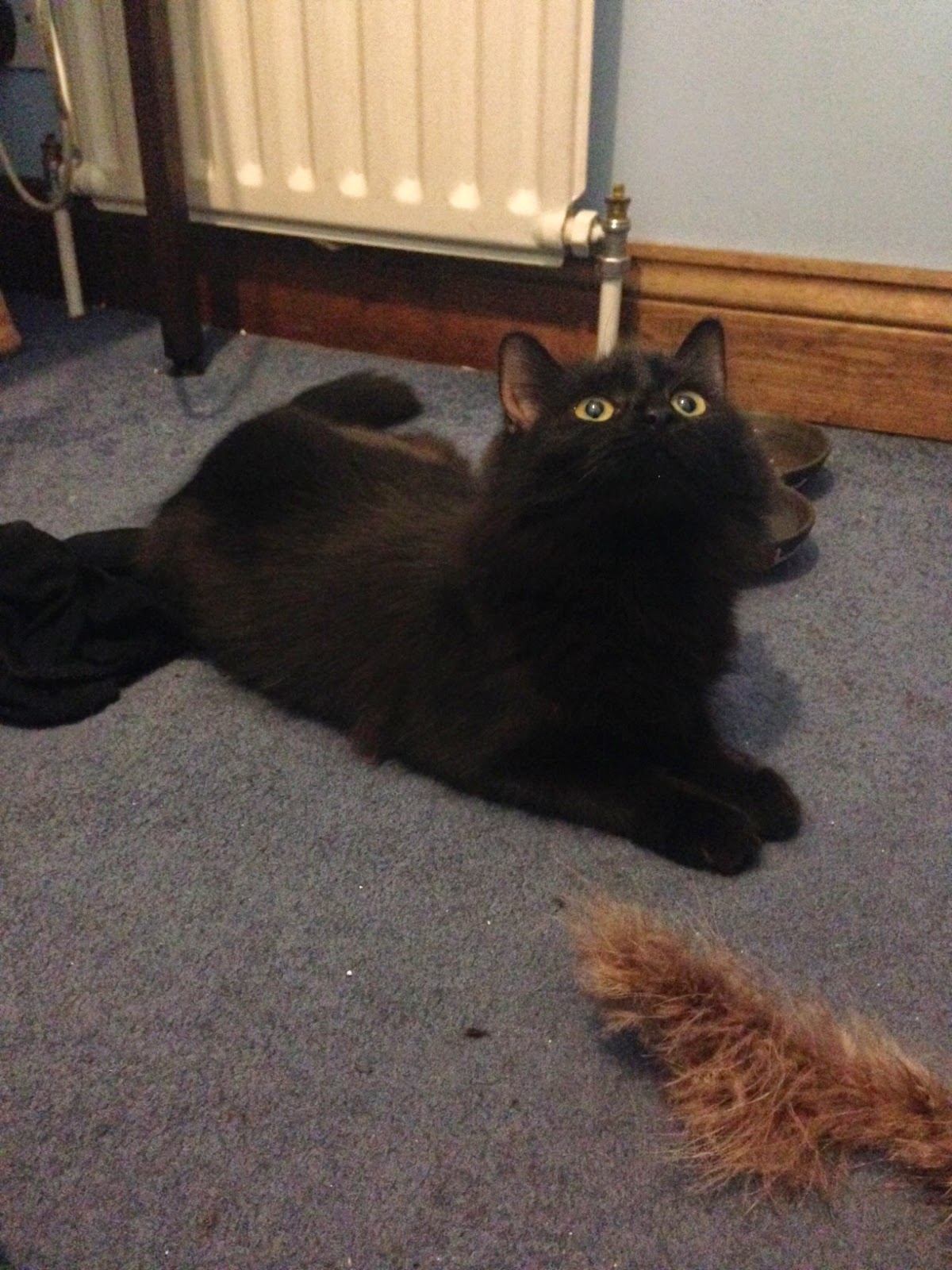 Misty (top) and Midnight (bottom) being beautiful (C) me

I wrote most of Rabble sitting in their room and getting distracted by their wonderousness so if at any point the first draft suddenly says something like:


'But we have to get the Cluster stone because OMG Midnight you are the cutest look at you licking your sister,' I said, and spontaneously turned into a butterfly from sheer joy.

that will be why.

Thing 5: A siege (or 'sedge' but Rule of Cool means I'm going with 'siege') of graffiti herons
Spotted along my bus route to the station over the last couple of months. There are at least five of these, most of which I haven't got pictures of, because moving bus + photo tends to come out like this:

But I did manage to grab a picture of this one:

Today is an auspicious day! I have delivered the first draft of Rabble, the sequel to Skulk, and I've also been given the go-ahead to show you something incredible...


First of all, here's the blurb:

Meg Banks is the metashifter, the only person in the world who can shapeshift into any one of the five creatures that guard London’s deepest magical secrets: fox, rat, spider, butterfly and raven. But with great power comes… well, you know the rest. To gain control of the five weard stones, the sorceress Victoria will stop at nothing, including using Meg’s own estranged mother against her.

Will Meg choose to use the stones’ power herself or keep them safely hidden? And can she work for peace, or must she destroy those who stand in her way?

Seriously, you might want to take a deep breath...

Maybe hold onto something... 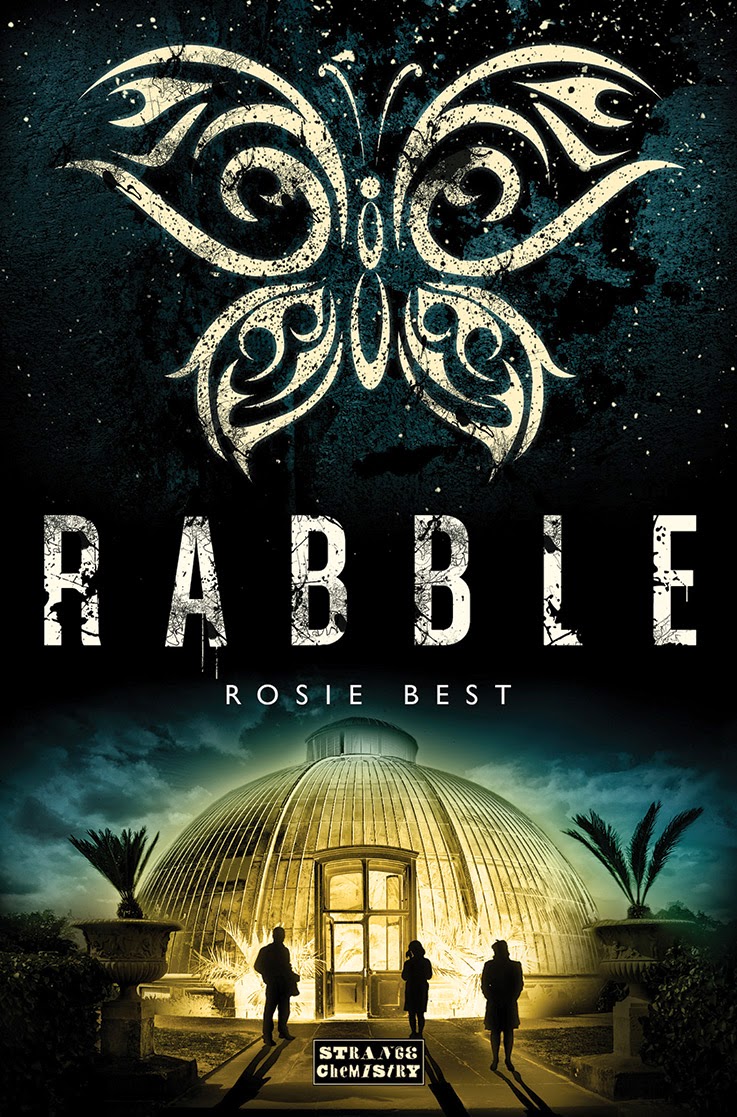 I can't get over this cover, it's so beautiful! My thanks again to the Strange Chemistry geniuses who came up with this!

Rabble is out in September, and oh my god you can pre-order it already aaaaaaahhh.
at April 07, 2014 1 comment: